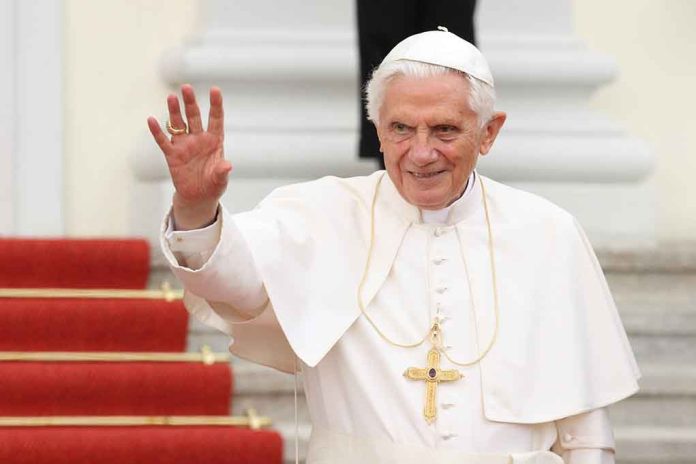 (RepublicanNews.org) – Pope Benedict XVI, who died on Saturday at 95, was conscious until nearly the end of his life, according to Vatican sources.

The nurse caring for the deceased Pope recorded his final words around 3 a.m. on December 31. He needed constant care at the time but had not yet become incoherent.

Benedict’s secretary, Archbishop Georg Gänswein, told Vatican News that Benedict said in Italian, ‘Lord, I love you!’ with a whisper of a voice that was “clearly distinguishable.” The Archbishop wasn’t there at the time, but the nurse informed him shortly afterward.

Those were his last comprehensible words because he was “no longer able to express himself after that,” said Archbishop Georg Gänswein.

The late pontiff’s body is currently on display at the Mater Ecclesiae Monastery in Vatican City, where he spent the majority of his post-papacy life.

On the eve of the first day of viewing Pope Emeritus Benedict’s body, Italian police predicted 30,000 visitors. 65,000 people had passed through St. Peter’s Basilica by the end of the evening.

As the day began, ten Papal Gentlemen, lay assistants to the Pope, arrived.

Before the general public was allowed into the basilica, prayers were said and the archpriest of the basilica, Cardinal Mauro Gambetti, sprinkled holy water over the body. Benedict had his hands clasped, a rosary wrapped around his fingers.

The Vatican confirmed widely reported burial plans on Monday. According to Vatican spokesman Matteo Bruni, Benedict’s tomb will be in the crypt of the grotto beneath the basilica that St. John Paul II last used before the saint’s body was moved upstairs into the main basilica ahead of his beatification in 2011.

The body was carried to its final resting place in front of the main altar on a cloth-covered wooden stretcher.

According to the Vatican, Pope Francis will preside over the late pontiff’s funeral mass in St. Peter’s Square on January 5.