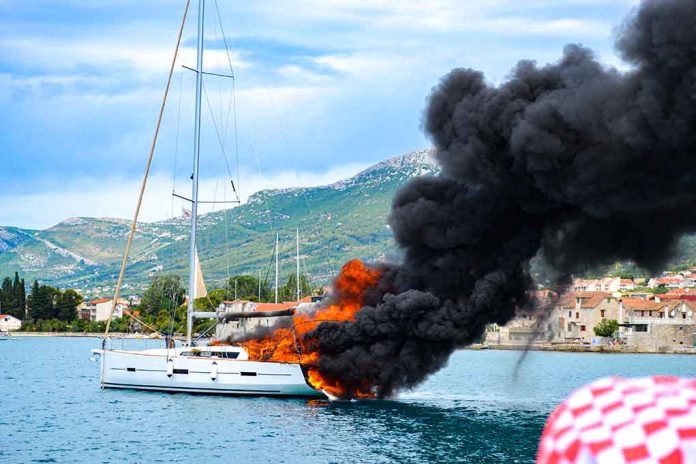 (RepublicanNews.org) – A captain whose dive boat caught fire in 2019, killing 34 people, is facing a new indictment just weeks after the original case against him was dismissed. Officials blame the boat’s captain for the disaster, but last month a judge threw out the case against him over a minor wording error. Now, prosecutors are trying again.

A federal grant jury issued a new indictment against a dive boat captain, alleging he acted with gross negligence when a 2019 fire aboard his vessel led to the deaths of 34 people off the Southern California coast. https://t.co/kSHVgcGeEh

On September 2, 2019, the 75-foot dive boat MV “Conception” was moored off Santa Cruz Island, CA with 33 passengers and six crew members on board. Around 3 a.m. a fire broke out in the cabin. Five among the crew sleeping on the upper deck survived, but all 34 people below died deck died. It’s still unknown what exactly caused the fire. However, while two recent US Coast Guard inspections had passed “Conception” as safe, the crew hadn’t mounted an overnight roaming fire watch — a violation of the boat’s operating certificate.

A 2020 report by the National Transportation Safety Bureau (NTSB) blamed the boat’s operator for the accident. According to the NTSB, Truth Aquatics had failed to ensure the captain, Jerry Boylan, was running the boat safely. Boylan, a certified merchant mariner who was 65 at the time of the disaster, was charged with a single count of “seaman’s manslaughter” — lethal neglect or misconduct by a ship’s officer — resulting in 34 deaths.

Last month a Los Angeles federal judge threw out the case against Boylan. According to AP News, the indictment was invalid because it accused him of “misconduct, negligence and inattention” but not gross negligence. Families of victims were outraged by the decision. On October 18, a federal grand jury agreed and issued a new indictment, again accusing Boylan of seaman’s manslaughter — with the right wording this time.