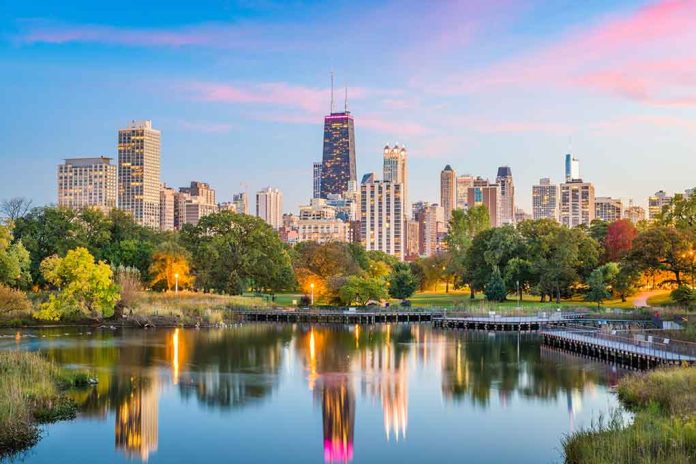 Death And Destruction Reach Uncharted Levels In This Liberal City

(RepublicanNews.org) – Officials are speaking out about skyrocketing crime rates in Chicago this week. Authorities say a handful of drive-by shootings and other incidents took place between April 22-24, marking it the area’s most violent weekend in 2022. At least 42 people were shot; some eight individuals lost their lives.

Chicago sees most violent weekend so far in 2022, with 8 murders and 42 people shot https://t.co/1zsXEwtW85 #FoxNews

An article published in The Chicago Sun-Times ties the rise in violent crime to the weather, suggesting that as risks rise alongside increasing temperatures. However, the news outlet also writes that both shooting incidents and homicides have decreased by 15% and 10% compared to 2021.

The Sun-Times also suggested that current crime rates have become a political liability for Mayor Lori Lightfoot. The mayor called 2022 a “make-or-break year” back in January, pledging to increase positive interactions between citizens and police by nearly 1 million in 2022.

Chicago Police Superintendent David Brown also gave an update on crime statistics during a press conference that took place on April 8, mirroring statistics similar to those shared by the Sun-Times. Brown also revealed a separate strategy to address the problem; authorities plan to focus more intensely on 55 high-risk beats located around the city.

While law enforcement agency actions will play an important role in Brown’s new plan, they won’t be working alone. Officials will also rely on coordination with other local agencies, the buildup of neighborhood block clubs, and the support of social services.

Will this approach be enough to keep Chicago from following a dangerous trend? With a fatal shooting taking place every weekend so far this year, the future remains difficult to predict.