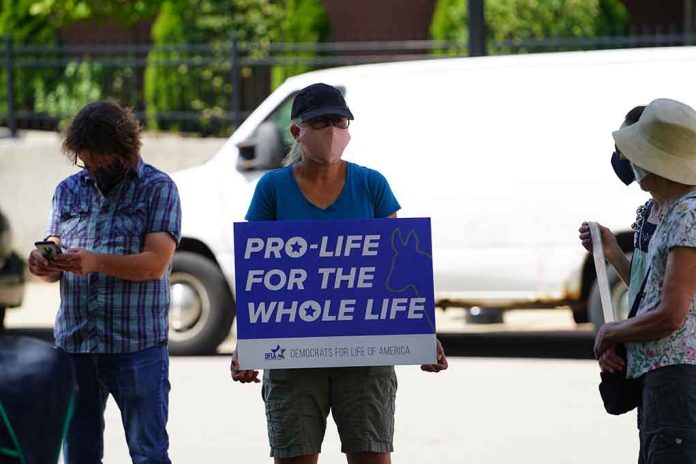 (RepublicanNews.org) – Following the leak of a draft of an as-yet-unreleased Supreme Court opinion, many people have expressed outrage at the idea of the high court overturning “Roe v. Wade,” a landmark case granting women the rights to seek abortions in the US. Democratic leaders have come forward to urge the need for Congress to pass legislation to protect abortion rights, and some have even gone so far as to say they’ll defy the Supreme Court.

The draft, which Chief Justice John Roberts confirmed as authentic, would overturn the 1973 decision, allowing states to draft their own laws in regards to abortion. Leaders of the House and Senate, Speaker Nancy Pelosi (D-CA) and Senator Chuck Schumer (D-NY), released a joint statement claiming the court’s overturning of “Roe v. Wade” would be “the greatest restriction of rights in the past fifty years” for women and all Americans. They claimed the Conservatives Justices lied to Congress and the American people during their confirmations.

Leaders like Bernie Sanders (I-VT) and Alexandria Ocasio-Cortez (D-NY) have both expressed their frustrations on Twitter while calling for Congress to codify abortion rights. The Left wants to codify “Roe v. Wade” to ensure women have the right to abortions, even if the Supreme Court decides to overturn the ruling.

Congress must pass legislation that codifies Roe v. Wade as the law of the land in this country NOW. And if there aren’t 60 votes in the Senate to do it, and there are not, we must end the filibuster to pass it with 50 votes.

The chances of such legislation making it through the House and the Senate are slim, especially with the Senate needing at least ten Republicans to vote for the movement without losing the support of any Democrats. One thing is certain: All this Supreme Court drama will likely make the 2022 midterms interesting.