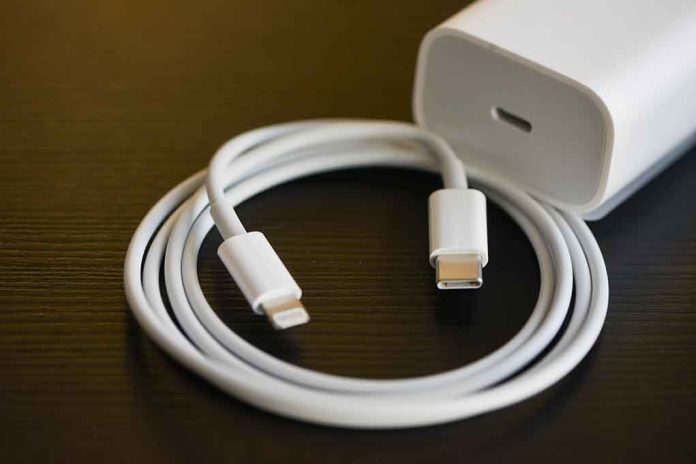 (RepublicanNews.org) – Differences between charging cords and other accessory connections for mobile phones may no longer be a problem in the European Union (EU) as of 2024. A new pending law would force manufacturers to install a universal USB-C charging port on all new devices, setting new standards that some companies, such as Apple, continue to avoid.

The European Union will require all new smartphones and tablets sold within its borders to have a common charging port by the fall of 2024 — and laptops by 2026 — under a new provisional agreement. https://t.co/icIiofNa8W

In a statement, EU leaders explained that the shift would cut down on electronic waste and make everyday life easier for consumers. However, the law must still pass approval in Parliament before it becomes official legislation.

Many mobile phone and device manufacturers have already implemented USB-C charging port technology. However, Apple continues to stand out with the iPhone’s Lightning charger. If the new legislation passes, the company will have no choice but to comply.

According to a report from Counterpoint, iPhones are the most popular device in both Germany and France. These two countries also just happen to be the EU’s top two economies.

Apple has begun implementing USB-C charger ports into the iPad line and even some laptops. However, it simultaneously brought back original charger styles for the MacBook Pro. That will need to change by 2026 if the new law passes. Newer models will also need to have USB-C charging ports as well.

Will the effects of these demands leak out into the rest of the world? It’s unlikely that Apple will create unique models specifically for the European market. Furthermore, the EU could easily enforce such legislation, limiting Apple’s options to conforming or opting out of the region entirely. Would Apple risk losing all those customers in order to keep its Lightning port?