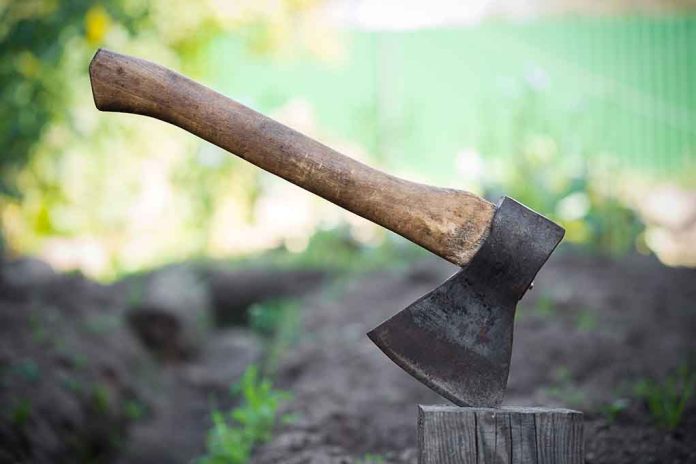 (RepublicanNews.org) – A recent altercation at a New York City McDonald’s restaurant led to an enraged customer brandishing an ax and threatening other patrons. Michael Palacios, a 31-year-old man from the Bronx, terrified onlookers with the display. Despite all the attention he’s received for his actions, the accused insists he had no violent intentions and was merely defending himself in an unfair fight. Meanwhile, some lawmakers are reeling over lax crime laws that could allow such an act to end in a suspect’s bail-free release from custody.

According to a New York Post report, an Uber Eats driver recorded Palacios attempting to chat with a female customer. The defendant allegedly became enraged when the woman “rejected him.”

Palacios tells a different story. According to his account, a security guard harassed him when he tried to use the bathroom. The so-called McDonald’s “ax man” says the facility was locked, and he merely wanted access. He alleges three other customers jumped in when he persisted, punching him repeatedly. Amid the melee, the man reportedly remained calm, opened his backpack, and brandished the bladed weapon. Then, he went on a terrifying rampage, destroying restaurant property and threatening his attackers. The ax man says he had no plans to hurt anyone; instead, he sought “to intimidate” his opponents.

Referring to a past experience, Palacios explained that he kept the ax in his backpack for self-defense. The suspect asserted assailants had jumped him before, and he vowed never to be the victim again. He prefers the battle weapon over a firearm, which he feels limits a carrier’s options and puts people in jail.

New York Governor Kathy Hochul slammed District Attorney Alvin Bragg, stating the charges against Palacios were too light. The defendant currently faces one count of criminal mischief, three counts of menacing and two counts of criminal possession of a weapon. Under the current law, courts release defendants facing such minor offenses without the need to post bail. Stiffer charges, which the DA could have opted for, would have eliminated the revolving door in this case.

Some residents blame Hochul, claiming her soft-on-crime policies are ultimately responsible for the issue. They argue limiting bail to the worst-of-the-worst crimes, such as murder, opens the doors for repeat offenses with few consequences. The debate over bail reform has placed a magnifying glass on both Hochul and Bragg, Manhattan’s first black DA.

Palacios had one previous run-in with law enforcement, during which officers charged him with resisting arrest.