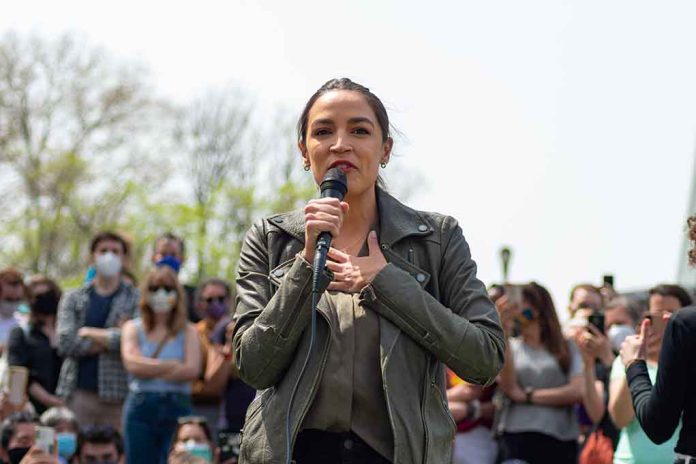 (RepublicanNews.org) Rep Alexandria Ocasio-Cortez (D-NY) pledged her support for Amazon workers looking to unionize the company’s Staten Island Facility, according to a report from Status Coup News. Christian Smalls, an organizer for the local Amazon workers’ movement, says the popular progressive made promises she chose not to keep. Feeling abandoned, he blasted AOC and claimed she had no right to share the moment.

“Hell no,” said Smalls, obviously frustrated with the representative from Woodside. His movement recently succeeded in creating the first unionized Amazon warehouse in the country.

Smalls’ harsh words for the congresswoman continued in a Twitter exchange. First, AOC tweeted the results of the election, seemingly supporting the movement. A blogger named “Krystal Ball” quickly called her out, posting the Status Coup News video link to hold her accountable.

Here’s the guy who organized the union drive talking about how you left them high and dry. These are your constituents and you couldn’t be bothered to show up until they’re on the cusp of victory. https://t.co/5wIu3VbbGi

AOC responded with sarcasm, offering a geography lesson. “The warehouse isn’t in my district” became her excuse, adding that she had a “scheduling conflict” before applauding her own visits to warehouses in her own district. Smalls was less than impressed, noting he personally knew many of AOC’s constituents who commuted to work.

Apparently, AOC failed to consider her city’s massive public transportation system. Nevertheless, the historic election affected her constituents and their families. Smalls made it extremely apparent that Amazon workers shouldn’t give her credit. Do you agree with his position?