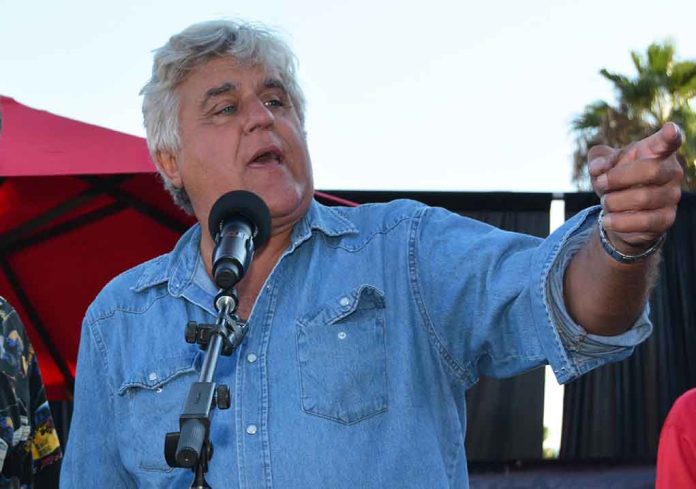 (RepublicanNews.org) – Comedian Jay Leno, made famous for his long chin and even longer stint hosting The Tonight Show, recently landed in the hospital with some serious injuries to his face. On November 14, TMZ reported that the talented TV personality sustained burns from a gasoline fire and will take time to recover.

On November 12, Leno was in his California garage, where he keeps his large array of cars, when one of them “erupted into flames.” The fire burned the star on the “left side” of his face but did no permanent damage to his ear or eye. Leno made a statement about his injuries, saying he would need a “week or two” to fully recover.

Jay Leno Seriously Burned From Gasoline Fire: ‘Need a Week or Two to Get Back on My Feet’ https://t.co/RjcIFl0JQ7

In fact, he canceled all of his appearances and scheduled events for the next week to allow him time to “get back on [his] feet.”

When news first broke about the incident, fans were reportedly concerned that Leno had suffered a heart issue. The star has been open about his cholesterol problems in the last few years, which might have sparked rumors over this recent event. Interestingly, he compared cholesterol sneaking up on a person to car problems, the culprit that landed him in the hospital.

Leno’s car talk stems from his love of automobiles. The comedian hosted a show called “Jay Leno’s Garage” from 2015 through the end of October. The cars in his Burbank garage were likely a part of the show.