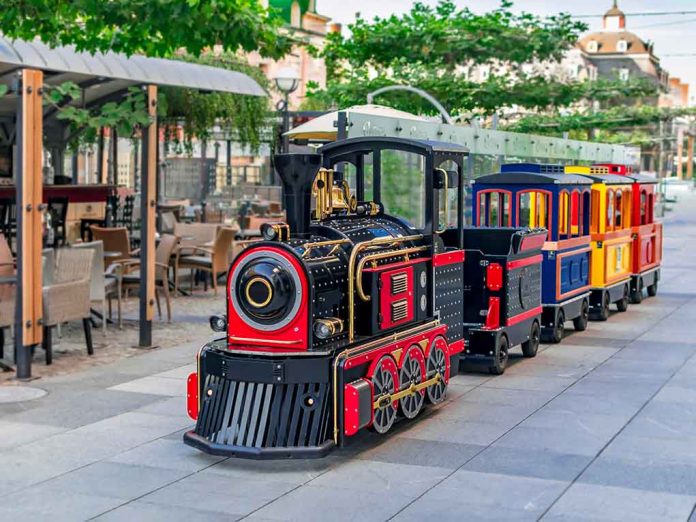 (RepublicanNews.org) – The war in Eastern Europe is nearly into its ninth month since Russia’s invasion earlier this year. Russian soldiers have come under scrutiny after repeatedly acting in unethical ways. The most recent controversy came after Vladimir Putin’s forces allegedly stole a children’s train.

The Russians "evacuated" (stole) a children's train from Kherson. Not only the monuments and ashes of Potemkin.
We are already accustomed to washing machines. But they took it to the next level.

Viewers can watch a van pass by, only to see a small train driving behind it. As of now there is no evidence of where the video was recorded or if it was even a Russian soldier operating the amusement park train.

This is far from the first time Putin’s army has been accused of stealing. In fact, there have been claims of theft against Russian forces since early into the invasion. Just three short days after Putin launched his “special military operation,” security footage emerged of Russian soldiers stealing a safe from a Ukrainian bank.

Russian soldiers stole a safe from a Ukrainian bank in Kherson region, according to the Ukrainian military pic.twitter.com/acnZG2KPmk

Separate videos showed Putin’s forces looting Ukrainian supermarkets. Russia has faced further accusations of its soldiers pillaging areas they have conquered within Ukraine. However, theft is far from the worst of the accusations the Russian military has faced since launching its invasion.

Throughout the course of the war in Eastern Europe, Ukrainian officials have maintained that Putin’s forces were committing heinous acts and war crimes. There have been several allegations of Russian soldiers raping Ukrainian women and the military massacring entire communities and throwing the bodies into mass graves. Additionally, Ukraine claimed Putin’s forces have carried out airstrikes against a theater, hospital and other buildings they knew were filled with civilians.

Ukraine claims the Russian military has destroyed 120,000 civilian structures, injured nearly 10,000 civilians, and killed almost 6,500 others. Among those they claim has Russia murdered, 430 were reportedly children.

The war has taken a turn in recent weeks with Ukraine successfully regaining thousands of miles of occupied territory. Much of the smaller country’s success has come from the support it has received from Western countries, especially the US which has sent tens of billions of dollars of equipment to Ukraine to help in the fight for their sovereignty.