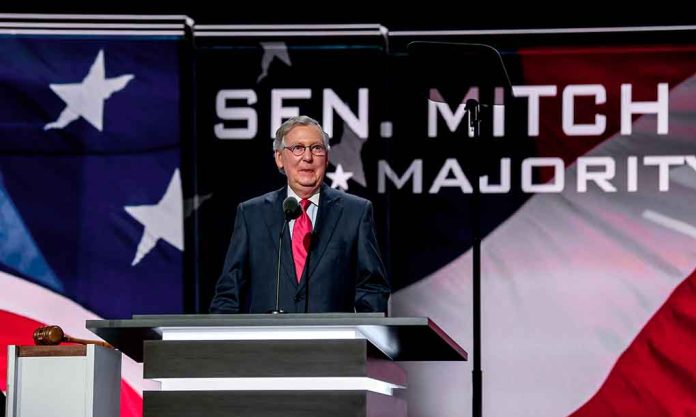 McConnell Plans To Side With Democrats on Newest Electoral Bill

(RepublicanNews.org) – The Electoral Count Reform Act appears likely to pass the Senate as support for the measure continues to grow. Minority Leader Mitch McConnell (R-KY) announced his support for the bipartisan measure, which he and other lawmakers hope will prevent a recurrence of the January 6 Capitol riot from ever happening in the future.

The bill, introduced by Sen. Susan M. Collins (R-ME) and cosponsored by 10 Republicans and 11 Democrats, proposes to “reform and modernize the outdated 1887 Electoral Count Act,” which legislators felt was too vague. The measure would fill in some ambiguous gaps left by the previous bill. The key provisions ensure each state identifies its governor as the only individual authorized to certify its electors and clarifies due process in cases where aggrieved candidates request judicial review. It also clearly defines the vice president’s role as “solely ministerial,” adds safeguards to reduce “frivolous objections,” and allows options for postponing elections in “extraordinary and catastrophic” circumstances.

The Electoral Count Reform Act is similar to the Presidential Election Reform Act, or HR 8873, which passed in the House on September 21. The only notable difference between the two is the number of congress members who need to object to a count. The Senate’s draft requires at least one-fifth of the House and Senate to agree, whereas the House’s version seeks one-third of the vote.