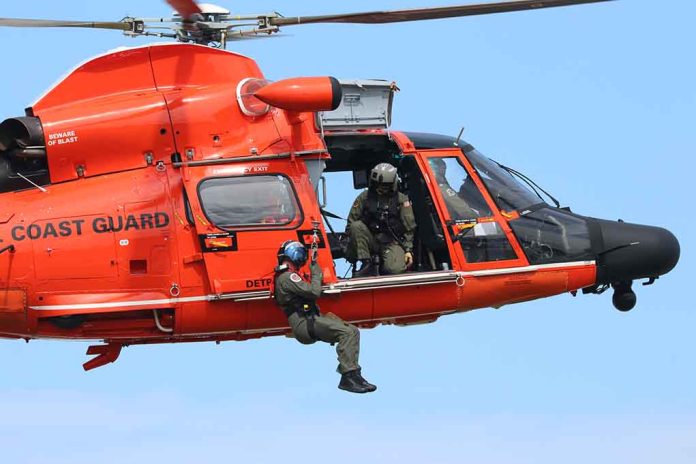 Dozens of Migrants Rescued From Boat Near Florida

(RepublicanNews.org) – The US isn’t only struggling with an overwhelming influx of migrants by land on the Southern border: it’s also facing a humanitarian crisis in the waters off Southern Florida as smugglers attempt to bring boatloads of refugees to American shores. On Sunday, October 16, the US Coast Guard rescued dozens of immigrants who’d reportedly gone without food or water for days from a boat in international waters off Boca Raton, Florida.

The USCG cutter “Dependable” saved 98 people, 96 of whom were Haitians, including almost a dozen children from a 40-foot cabin cruiser, the “Power Whirl.” In a statement, Captain Robert Kinsey of the USCG called the survivors “lucky to be alive” after spending a week on the “recklessly overloaded” vessel.

Kinsey warned others never to trust smugglers because they “do not care whether you live or die.” He cited how dangerously overloaded the “Power Whirl” was, the fact they had run out of food and water two days before their rescue, and the callous disregard for laws as reasons to avoid traffickers. Kinsey and the crew of the “Dependable” rendered aid to the passengers before transferring them back to Haitian authorities.

Haiti has suffered a series of natural disasters alongside economic upheaval, gang violence, and political unrest, which includes the assassination of the last elected president, Jovenel Moïse. Thousands of Haitian migrants fleeing their homeland have been intercepted this year. Just after the current story dropped, news outlets also revealed that authorities discovered over 100 Haitian migrants on an island close to Puerto Rico this week.

The USCG “Dependable” saved the day this time for nearly 100 souls. But how many will smugglers lose through indifference in future cases?