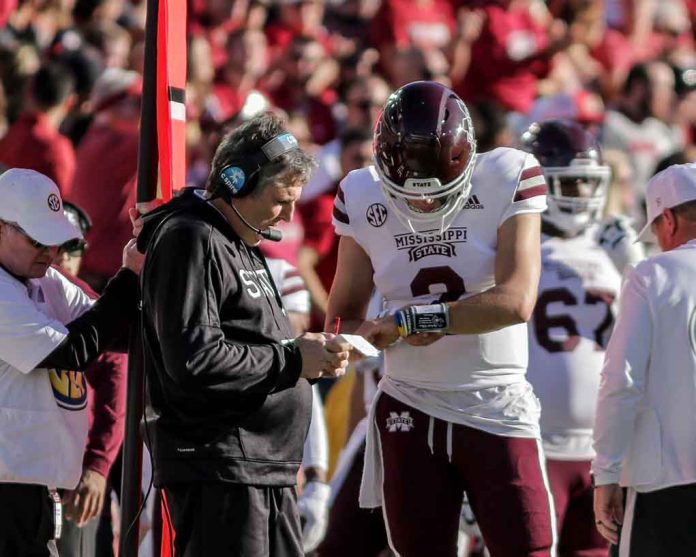 (RepublicanNews.org) – Mike Leach, the famous football coach variously described as ‘gruff,’ ‘pioneering,’ and ‘unfiltered’, has died aged 61. Reports first surfaced on the afternoon of Sunday, 11th December, that he had suffered a major health issue. His death, reportedly from a massive heart attack, was confirmed by family Monday evening. Leach is survived by his wife, Sharon, and children Janeen, Kim, Cody, and Kiersten.

In a statement, his family thanked fans, family, and friends for an outpouring of love and support and revealed that his final act of charity was to donate his organs at UMMC.

Leach never played college football and started coaching in 1987 at Cal Poly. He also coached at Texas Tech and Washington State before becoming Mississippi State’s head coach in January 2020. He is famous in the game for adopting the unorthodox and explosive “Air Raid” offense, which was derided as a gimmick before it proliferated and revolutionized the sport.

Leach was also known for his wide-ranging interests outside of football. Before starting his coaching career, he completed a law degree at Pepperdine and later wrote a book about Native American leader Geronimo. While coaching at Washington State, he even taught a class called “Insurgent Warfare and Football Strategies.”

Coach Leach was also well known for his colorful personality off the field. A football coach gets plenty of opportunities to speak to the camera, and Mike was certainly happy to oblige them with some memorable quotes, with forthright opinions on everything from the inedibility of candy corn to his opinions on aliens and Bigfoot.

Fans will have many favorite moments to reflect on, including his opinion on hot dogs; “I’ve never liked hot dogs, even when I was a kid,” he said, ending with the controversial claim, “And no, it’s not a sandwich.”