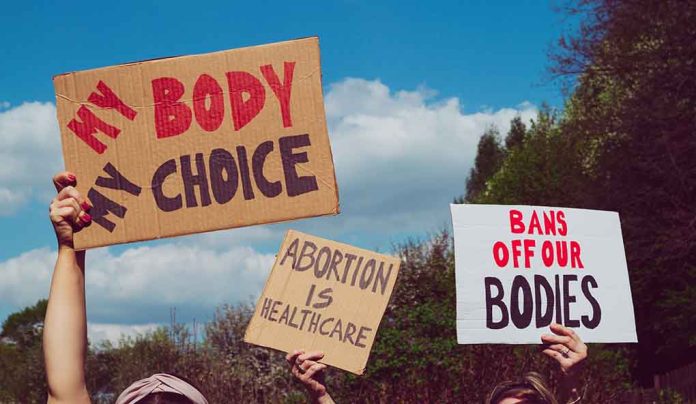 (RepublicanNews.org) – Ever since someone leaked a Supreme Court draft opinion regarding a case that could potentially overturn Roe v. Wade, a landmark abortion ruling, protests have erupted across the country. Pro-choice activists have targeted the High Court’s Justices, including an assassination attempt on conservative Justice Brett Kavanaugh. Now, protestors have targeted conservative justice Amy Coney Barret’s home, taking a “bloody” stance on the issue.

Protestors with the group Rise Up 4 Abortion Rights traveled to Falls Church, Virginia, and marched to Justice Barrett’s home. Outside her home, several women stood with pants stained with fake blood, their hands taped together, and babies in their grips. Some held signs, including one that said “Not Going Back” along with a picture of a coat hanger.

One of the women protesting, 15-year-old Ariana, asserted, “children are giving birth to children,” claiming, “they’re being forced to.” The group declared it wasn’t trying to “change the minds” of fascists, but instead, it was trying to encourage those within the pro-choice demographic to join them in protest.

We aren't incubators! Youth procession delivered baby dolls to Amy Coney Barrett. We aren’t protesting to change the minds of women-hating fascists.We're calling on the pro-choice majority, on YOU, to get in the streets to STOP #SCOTUS from overturning Roehttps://t.co/Y0oCPlHcsr pic.twitter.com/nkHT7iamHO

The Supreme Court hasn’t issued a ruling on the Dobbs v. Jackson Women’s Health Organization which has the potential to overturn Roe v. Wade and give the power to govern abortions back to the individual states. The Supreme Court could deliver a decision as early as this week.