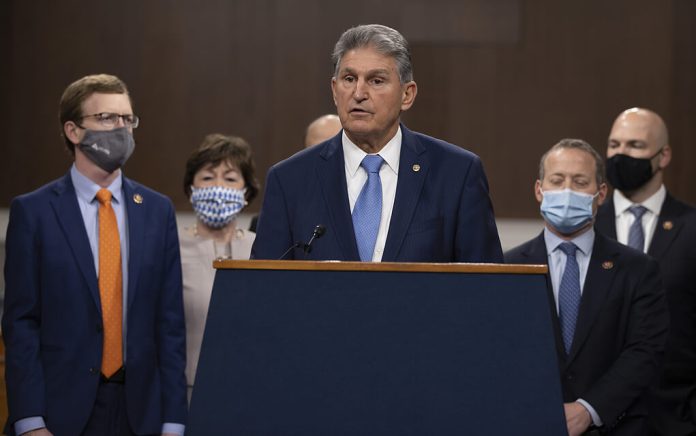 Manchin Is The New 2024 Target For Republicans

(RepublicanNews.org) – The 2022 midterms were disappointing for the GOP to say the least. Now, the party is looking to 2024 and gearing up to take the trifecta of the House, Senate, and Oval Office. Senator Joe Manchin (D-WV) has found himself to be at the center of the GOP’s attention as they look to unseat him.

While the Democrat has worked in a bipartisan way, Republicans are still gunning for him in 2024’s election cycle. Patrick Morrisey, West Virginia Attorney General, is one of the top Republicans with the potential to flip Manchin’s seat. According to The Hill, Morrisey asserted the Democratic Senator would be paying the price for his supporting vote to pass the Inflation Reduction Act.

Morrisey declared to The Hill that Manchin let his constituents down when he supported the bill, which the potential senatorial candidate described as “Build Back Broke.” The Republican asserted that a majority of West Virginians knew the bill wasn’t going to do them any good. Morrisey noted he was looking at his options and keeping an eye on the 2024 race.

Manchin barely beat Morrisey in the 2018 midterms, edging him out by around 19,000 votes, or three percent. The GOP explained Manchin’s secret deal with Senator Chuck Schumer (D-NY), the Senate Majority Leader, in exchange for his support of the Inflation Reduction Act has made him a top target in 2024.

The senator hasn’t announced one way or another if he’ll run for a fourth term in the upper chamber of Congress. However, political experts in the moderate liberal’s state have indicated that all signs point to Manchin running again. The road to a fourth term is a rocky one for the Democrat, especially considering he’ll be running in a state that has become increasingly red over the past several years. In 2016, West Virginia favored Donald Trump over Hillary Clinton, with the former earning 68% of the state’s vote. The story wasn’t much different in 2020, when Trump won 69% of West Virginia votes against Joe Biden.

Still, even with a road paved with trouble, Senator Manchin isn’t one to back down according to Sam Runyon, his spokeswoman. She declared her boss encourages candidates with the public’s best interest in mind to run. While Republicans target Manchin and expect to funnel money into West Virginia in the hopes of flipping his seat, the senator will likely be focused on making bipartisan deals according to Jonathan Kott, a former aide to the Democrat. Kott asserted Manchin doesn’t care about politics, noting his former boss is more concerned with what’s best for his constituents and, more importantly, the United States of America.