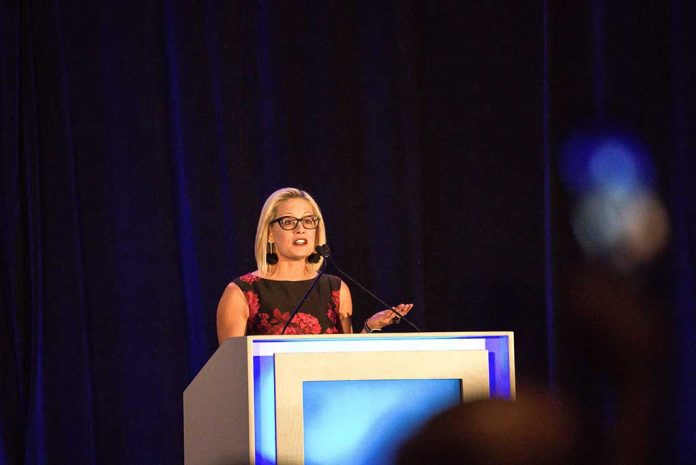 This Politician Won’t Talk About Her Plans – Why Is She Hiding?

(RepublicanNews.org) – Democrats have had an issue getting all the members of their caucus on board with certain pieces of legislation. As the August recess approaches, Senate Majority Leader Chuck Schumer (D-NY) is under pressure to pass a reconciliation package. However, Senator Kyrsten Sinema (D-AZ), who has been a problem for her party in the past, hasn’t decided whether she wants to support the bill. The proposal’s fate depends on her vote.

If Big Business hadn't spent the last three years trying to help China and fight us, they wouldn't be so worried about taxes now.

By passing the measure, Schumer can tackle climate change and alter the current tax code to levy a tax on America’s wealthy. The Majority Leader has already secured the vote of one problematic Democrat, Joe Manchin (D-WV), by striking a deal with the Senator on July 27. A little over a week has passed, and Sinema has yet to announce her intentions. Her secrecy has both parties on edge.

According to The Hill, the Arizona senator’s office is reviewing the 700-page legislation and waiting to see the Senate parliamentarian’s review of the bill. Her colleagues likely won’t get an answer from her until the text goes to the floor. Republicans seem to believe Sinema may block the reconciliation package, but Democrats hope she doesn’t. What do you think she’ll do?