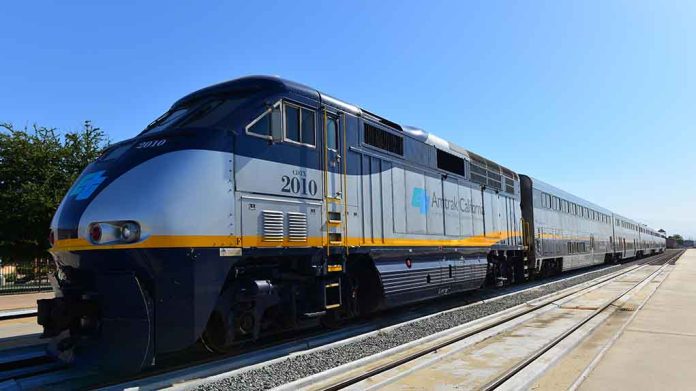 (RepublicanNews.org) – Three people died after an Amtrak train struck a vehicle in Brentwood, California, over the weekend. The commuter train careened into a sedan as it went through a well-known local crossing point at around 1 p.m. on June 26. The forceful collision triggered a domino effect, pushing the car into a second SUV.

Julia Mondragon, 41; Mercedes Regalado, 51; and Maria Nieves, 72 all died at the scene. Two others, including one child, suffered injuries in the crash. Emergency services transported both survivors to a nearby hospital.

Amtrak was transporting approximately 90 passengers on the westbound train at the time of the accident. Police say none of the riders suffered injuries.

Notably, the crash happened at a rural crossing some locals have called “dangerous” in the past. The controversial location features neither a signal system nor moving barriers to stop traffic when a train is approaching.

According to the New York Times, the Brentwood crossing has a well-documented history of causing accidents; crashes occur at least once or twice yearly. Trains travel through the location at speeds of up to 80 mph. Without barriers or signals in place, they have no way to regulate traffic or keep vehicles out.

Unfortunately, the Brentwood collision isn’t an isolated incident. A second Amtrak train struck a dump truck in Missouri on June 27, causing a handful of cars to topple and derail. At least three people died in that accident, while dozens of others suffered injuries.