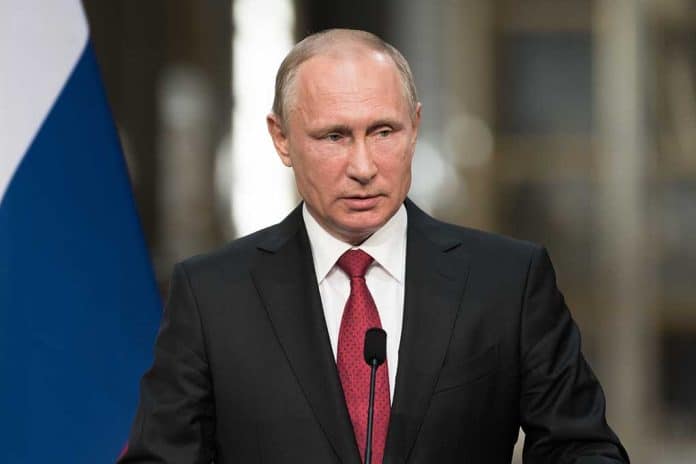 (RepublicanNews.org) – Tensions are at a boiling point in Eastern Europe, where Russia and Ukraine continue to have conflict. Mainstream media outlets have consistently pushed the narrative there’s an “imminent war” with Russia coming, and those who’ve opposed the idea have been considered Russian agents. Fox News host Tucker Carlson is all too familiar with the accusation and is firing back.

Carlson recently accused President Biden of stirring up a frenzy in America about war with Russia. In his segment on January 28, the Fox host discussed reports alleging Ukrainian President Volodymyr Zelensky has urged Biden to ease his stance on the situation.

The popular commentator added the media would see the Ukrainian president’s attempt to cool the situation down as siding with Russia. Carlson then sarcastically told the audience he and Fox News could empathize because they’ve been called agents of Putin too — referring to a segment in which Representative Eric Swalwell (D-CA) called Carlson an agent of Putin.

Carlson has voiced his speculation of Washington’s approach to the situation, backing the capital of Ukraine, Kyiv, through the North Atlantic Treaty Organization (NATO) with Biden pushing the idea a Russian invasion of Ukraine was inevitable. Russia insisted its military build-up along the Ukrainian border resulted from Ukraine’s continued movement toward an alliance with NATO. Carlson agrees Russia has every right to protect its border from what it believes is a growing threat.

Does that mean Tucker Carlson is an agent of a foreign government? Is it not the right of Americans to question their government? Whether Russia will invade Ukraine remains to be seen, but if what Carlson says is true, the United States and allies are the provocateurs.