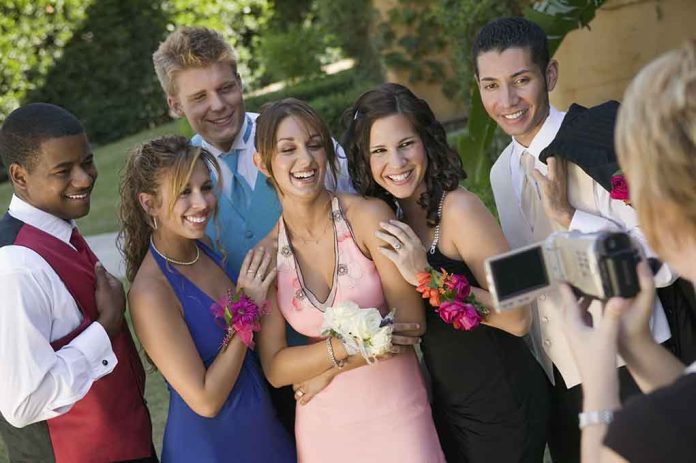 (RepublicanNews.org) – As Russia continues its assault on Ukraine for almost the fourth month, it’s becoming increasingly clear that Ukrainians aren’t giving up. Many locals are making the most of hard times by carving out a little slice of joy wherever they can find it. One group of high schoolers recently came together to celebrate their graduation in an end-of-year prom with a surprising backdrop: their own war-torn city.

In a jaw-dropping display of defiance, teenage school-leavers in war-torn Ukraine don their ballgowns and tuxes for an end-of-year prom https://t.co/x5PuJz4CYy

Students dressed in ball gowns and tuxedos mingled, took pictures, and danced in front of the destroyed No 134 school in Kharkiv on June 5. Ukrainian soldiers remained present to guard the event and closely watch over attendees.

The jarring post-apocalyptic prom was influenced by a Ukrainian tradition in which new graduates partake in a dance in front of the entire school. This year, of course, was very different; students waltzed on a basketball court in front of rubble instead of a well-kept façade.

Many of the girls present mentioned planning what they were going to wear for a long time before the school’s destruction. They weren’t going to let Russia steal their moment.

Graduates admitted that they were glad it was their last year in high school, citing the damage the school suffered at Russia’s hands. These dedicated and determined students could have missed out on a once-in-a-lifetime opportunity otherwise, despite having no part in the current conflict. Their spirits remain high even though future students may have to wait to come back.